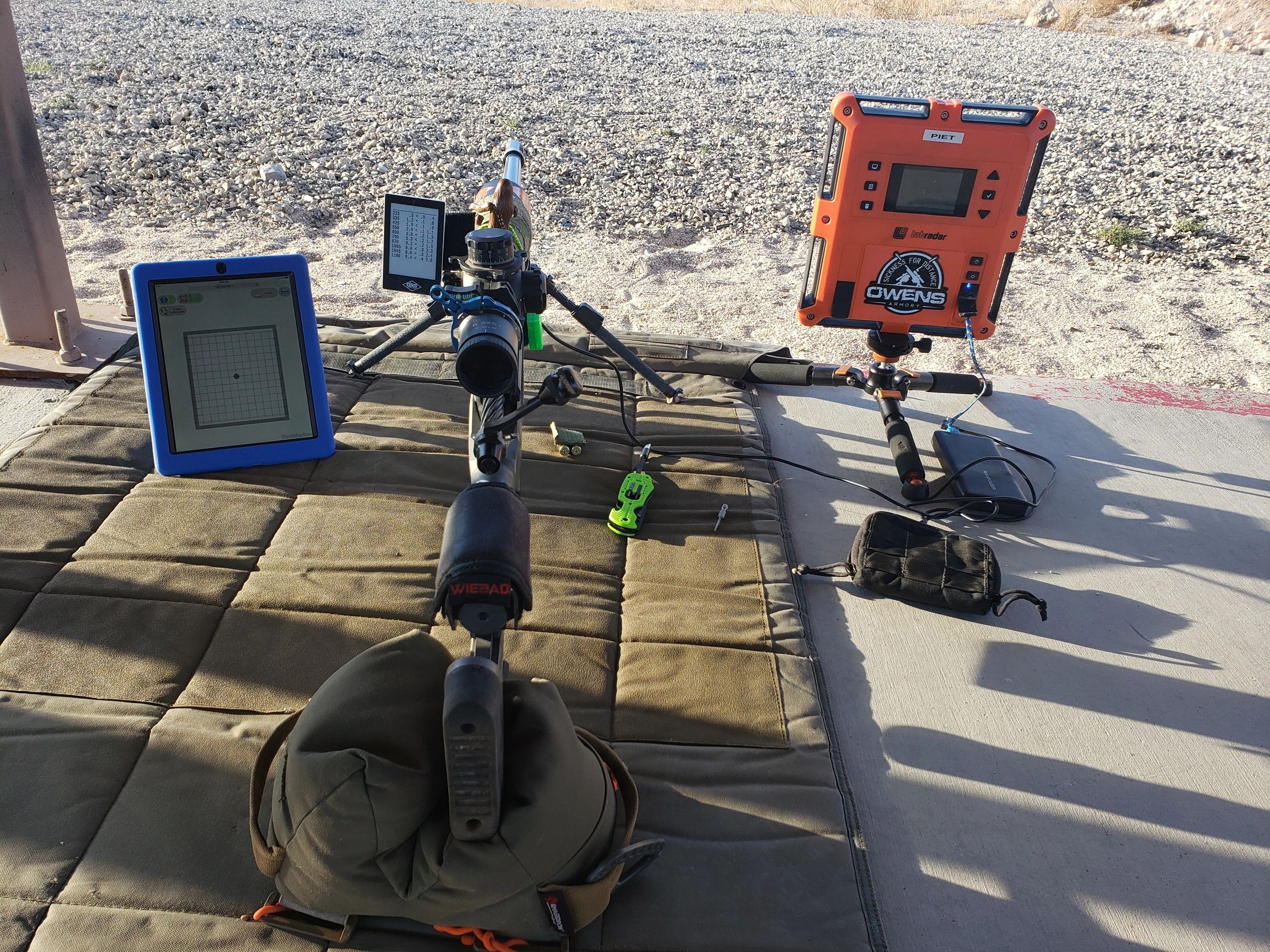 This picture is my normal setup.  The rifle here is a 6BR with a Area 419 Sidewinder 4 port brake.  The bright green thing on the rifle is my sensor.  A few things of note:

1) The Radar is NOT on the shooting mat

2) The Radar does not get moved by the shooting mat

3) The Radar is not at the best spot due to brake blast.

If you are having issues read on...

The videos on the main page walk you through a lot of the setup and testing practices.  If what you are seeing doesn't fall in one of those videos keep on reading.

I had one person on social media report that they had two LabRadar units one with a recoil sensor and one without.  The one with the sensor was giving a good shot one value and then causing significantly different and inaccurate speeds.  I was never able to re-create that report with two separate units however I did recently recreate the following:

A friend was using my unit and he had some very "wrong" values after the first shot gave an "expected" value.   What I found was that his muzzle brake was hitting the radar just right and causing the radar to jostle during firing resulting in a few acquisition errors and also causing speed values way off.  I also noticed that he only had speeds for three distances when he was getting values.  After close inspection I noticed the aim was thrown off by the muzzle blast after the first shot.

1) Move labradar forward or back about 8 inches to avoid brake blast and all was well.  Speeds were not noticeably different moving the unit a few inches forward or back.

2) Change placement of recoil trigger on rifle.  I personally have not seen a "dwell time" issue with the triggering resulting in an inaccurate speed however the sensitivity is tuned by placement on the rifle.  If this is an issue we never discovered during the development years relocating the trigger should help you get valid measurements.

Is it rimfire?  Is it in a sled?  Remember it is a recoil trigger so without recoil it shouldn't work.  These are pretty sensitive and a lot of people seem to love these for 22LR but the placement may be a big deal here.   When I was having the most issue being locked in I put the trigger in the palm of my firing hand between the grip and my hand and I got good triggers on my heavier rimfire.

Check the video for bench testing the trigger before going to the range.  Most of the issues with the recoil trigger is a damaged plug/wire or I have seen a small percentage of the internal sensors fail.  If it doesn't pass the bench test like in the videos please reach out to me so we can get you going again!

So if you look at my setup it works great for all my rifles.  A friend of mine laid his gun down draped the sensor over and it was a hot mess.  It triggered but wouldnt acquire.  It wasn't a late trigger, but his setup although quite similar was blasting the LabRadar "just right" to jiggle the unit so it wouldn't acquire.  I moved the unit a few inches forward and then tried a few inches back and just getting out of the brake blast it was back to working and providing number that lined up with a magnetospeed.

Too many false triggers

Unfortunately this is the biggest design issue with the little trigger.  It needs to be tuned by placing the trigger elsewhere on the rifle.   This is a reason why I don't have a picatinny or mlok mount for these units.  Elastic cordage is a great way to affix it to different areas on the rifle.  Check the advanced mounting video for options/ideas on the home page.